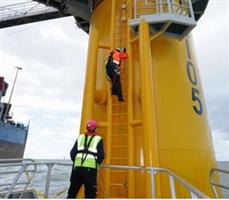 Limpet Technology is embarking on the development of a new access solution that focuses on allowing technicians and loads to transfer between vessels and offshore wind turbines more safely and in higher sea states. The overarching technical objective is to deliver a solution that can be proven to deliver safe and reliable access to and from offshore wind turbines in sea states up to and beyond 2.5 metres Significant Height (Hs).

December 2017: System testing for Sliding Transfer on CTV Simulator and 7MW Offshore Demonstrator Turbine
Since the Game Changers campaign in June 2017, we've made great progress in the development of our personnel transfer system, and conducted a great deal more testing both on our CTV simulator and on the 7MW Levenmouth Demonstrator Turbine. We have moved our CTV simulator to a facility in Methil only 500 metres from the turbine, so as to be able to more easily translate developments in the workshop into real world testing and to facilitate demonstrations on both.  After six months of being exposed to the elements on the transition piece deck and landing ladder, the prototype system is showing no signs of discomfort. Although the Firth of Forth doesn't experience weather or sea states as challenging as the North Sea sites that offshore wind farms are being installed into, as we come into the winter months, we hope that we will get more opportunity to use the deck tracking and motion compensation features that are a critical feature of the system. However, these can readily be seen in action in the recently shot video from our workshop, which documents some of the hours being put in to testing our system as a means of enabling safe 'sliding transfer' i.e. a transfer from a CTV to the ladder with the boat riding on the waves rather than thrusting against the buffer bars on either side of the ladder.
June 2017: 'Backing the Game Changers' Campaign with ORE Catapult

In June 2017, we installed the second prototype system onto the ORE Catapult's 7MW Offshore Demonstrator Turbine at Levenmouth in order to accelerate prototyping in a life-like offshore turbine environment. With a long landing ladder falling from the transition piece gantry into the Firth of Forth, the location strikes the perfect balance between realism and accessibility, minimising the cost, complexity and risk of prototyping in a live offshore wind farm. We have also been chosen as one of a handful of companies to show case the work being done by ORE Catapult as part of their 'Backing the Game Changers' campaign
January 2017: Workshop Simulator Proves Limpet Offshore Personnel Transfer Concept

During January 2017, we completed the build of our first prototype system and we are now engaged in testing and further development. We are also demonstrating the system to stake holders within the offshore wind sector in order to gather feedback and move towards sea-trials. The basic capabilities of our prototype system can be seen in the video below. Please take a look. We welcome your comments and if you would like to discuss the system or see it demonstrated at our workshop in Edinburgh, then please get in touch.
October 2016: Limpet Technology Sets the Scene for Personnel Transfer System Development with ITN's 'Welcome to the Drop' Production

Please take a look at the short film below, which discusses our Offshore Personnel Transfer System project and which was produced in October 2016 by ITN Productions in collaboration with the World Petroleum Council as part of the 'Journey of the Drop' series of films.