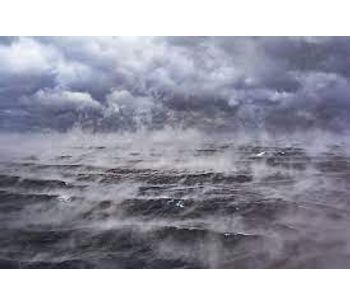 With freshwater resources around the world coming under increasing pressure from climate change, extreme weather events, urbanisation, water mismanagement and population growth, it’s becoming increasingly important to find ways in which supplies can be shored up… and it seems that there may be some potential for the use of oceanic water vapour in this regard.

New research from the University of Illinois Urbana-Champaign has just revealed that investing in new infrastructure that can harvest this water vapour could help increase freshwater supplies in various water-stressed locations, with the proposed solution working in a similar way to the natural water cycle.

The study evaluated 14 water-stressed regions to see how feasible it would be for a hypothetical structure to capture water vapour from above the ocean and condense it into freshwater in such a way as to remain feasible even in the face of continued climate change.

Atmospheric and economic analysis was carried out on the placement of these offshore structures, with the researchers concluding that capturing moisture above ocean surfaces is indeed feasible for many places around the world.

The estimated water yield of these hypothetical structures could provide freshwater for densely populated centres in the subtropics, for example.

This could be a viable option in place of strategies like cloud seeding and desalination, which have met with only limited success. For instance, while desalination plants have been implemented in some places, they bring their own sustainability issues with them because of the brine and metal-laden wastewater that is produced.

In fact, California has gone so far as to reject plans to bring in new desal plants for this very reason, which means other solutions must now be identified and brought in.

Lead author of the study Praveen Kumar said: “Water scarcity is a global problem and hits close to home here in the US regarding the sinking water levels in the Colorado River basin, which affects the whole Western US.

“However, in subtropical regions, like the Western US, nearby oceans are continuously evaporating water because there is enough solar radiation due to the very little cloud coverage throughout the year.”

He went on to say: “Eventually, we will need to find a way to increase the supply of fresh water as conservation and recycled water from existing sources, albeit essential, will not be sufficient to meet human needs. We think our newly proposed method can do that at large scales.”

Figures from the UN show that 2.3 billion people currently live in water-stressed countries, with 722 million living in high and critically water-stressed parts of the world. Furthermore, around four billion people (which is almost two-thirds of the global population) experience severe water scarcity issues during at least one month of the year… and these figures are only expected to grow as time goes on.

Interested in finding out more about public sector water savings? Get in touch with the H2o Building Services team today to find out more.

No comments were found for Could Ocean Water Vapour Harvesting Ease the Water Crisis?. Be the first to comment!