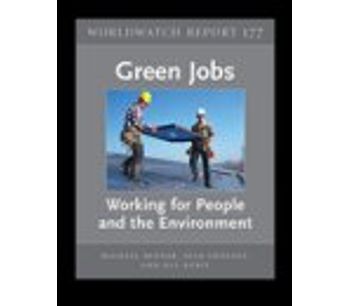 Green Jobs: Working for People and the Environment

The pursuit of so-called 'green jobs'—employment that contributes to protecting the environment and reducing humanity's carbon footprint—will be a key economic driver of the 21st century. 'Climate-proofing' the global economy will involve large-scale investments in new technologies, equipment, buildings, and infrastructure, which will provide a major stimulus for much-needed new employment and an opportunity for retaining and transforming existing jobs.

The number of green jobs is on the rise. The renewable energy sector has seen rapid expansion in recent years, with current employment in renewables and supplier industries estimated at a conservative 2.3 million worldwide. The wind power industry employs some 300,000 people, the solar photovoltaics (PV) sector an estimated 170,000, and the solar thermal industry more than 600,000. More than 1 million jobs are found in the biofuels industry growing and processing a variety of feedstocks into e

The number of green jobs is on the rise. The renewable energy sector has seen rapid expansion in recent years, with current employment in renewables and supplier industries estimated at a conservative 2.3 million worldwide. The wind power industry employs some 300,000 people, the solar photovoltaics (PV) sector an estimated 170,000, and the solar thermal industry more than 600,000. More than 1 million jobs are found in the biofuels industry growing and processing a variety of feedstocks into ethanol and biodiesel.

Construction jobs can be greened by ensuringthat new buildings meet high performance standards. And retrofitting existing buildings to make them more energy-efficient has huge job potential for construction workers, architects, energy auditors, engineers, and others. The weatherization of some 200,000 apartments in Germany created 25,000 new jobs and helped retain 116,000 existing jobs in 2002–04.

The transportation industry is a cornerstone of modern economies, but it also has the fastest-rising carbon emissions of any sector. Relatively green auto manufacturing jobs—those in manufacturing the most-efficient cars currently available—today number no more than about 250,000 out of roughly 8 million in the auto sector worldwide.

Modern rail and urban transit systems offer a greener alternative, but they need fresh commitment and investments to reverse the job erosion of recent decades. In growing numbers of cities, good jobs are being generated by the emergence of bus rapid transit systems. There are also substantial green employment opportunities in retrofitting old diesel buses to reduce air pollutants and in replacing old equipment with cleaner compressed natural gas (CNG) or hybrid-electric buses. In New Delhi, the introduction of 6,100 CNG buses by 2009 is expected to create 18,000 new jobs.

The steel, aluminum, cement, and paper industries are highly energy-intensive and polluting. But increasing scrap use, greater energy efficiency, and reliance on alternative energy sources may at least render them a pale shade of green. Worldwide, more than 40 percent of steel output and one-quarter of aluminum production is based on recycled scrap, possibly employing more than a quarter million people.

Recycling and remanufacturing jobs worldwide number many millions, but incompatible definitions and a lack of data gathering make a global tally impossible. China alone is thought to have some 10 million jobs in this sector, and the United States has more than 1 million. In developing countries, recycling is often done by informal networks of scavengers. Brazil, which boasts a high rate of aluminum recycling, relies on some 500,000 scrap collectors. Cairo`s 70,000 Zabaleen recycle as much as 85 percent of the materials they collect.

Agriculture and forestry often still account for the bulk of employment and livelihoods in many developing countries. Small farms are more labor- and knowledge-intensive than agroindustrial farms are, and they use fewer energy and chemical inputs. But relatively sustainable forms of smallholder agriculture are being squeezed hard by energy- and pesticide-intensive farms and by global supply chains. Organic farming is still limited. But because it is more labor-intensive than industrialized agriculture, it can be a source of growing green employment.

Afforestation and reforestation efforts, as well as better stewardship of critical ecosystems more generally, could support livelihoods among the more than 1 billion people who depend on forests, often through non-timber forest products. Planting trees creates large numbers of jobs, although these are often seasonal and low paid. Agroforestry, which combines tree planting with traditional farming, offers significant environmental benefits in degraded areas—including carbon sequestration. Some 1.2 billion people already depend on it to some extent.

The potential for green jobs is immense. But much of it will not materialize without massive and sustained investments in the public and private sectors. Governments need to establish a firm framework for greening all aspects of the economy, with the help of targets and mandates, business incentives, and reformed tax and subsidy policies. It will also be critical to develop innovative forms of technology transfer to spread green methods around the world at the scale and speed required to avoid full-fledged climate change. Cooperative technology development and technology-sharing programs could help expedite the process of replicating best practices.

To provide as many workers as possible with the qualifications they will increasingly need, an expansion of green education, training, and skill-building programs in a broad range of occupations is crucial. Resource extraction and energy-intensive industries are likely to feel the greatest impact in transitioning to a low-carbon future, and regions and communities highly dependent on them will need assistance in diversifying their economic base, creating alternative jobs and livelihoods, and acquiring new skills. This is known as a `just transition.`

Green jobs need to be decent jobs—offering good wages and income security, safe working conditions, dignity at work, and adequate workers` rights. Sadly, this is not always the case today. Recycling work is sometimes precarious, involving serious occupational health hazards and often generating less than living wages and incomes. Growing crops at biofuels plantations in countries like Brazil, Colombia, Malaysia, and Indonesia often involves excessive workloads, poor pay, exposure to pesticides, and oppression of workers. These cautionary aspects highlight the need for sustainable employment to be good not only for the environment but also for the people holding the jobs. Still, an economy that reconciles human aspirations with the planet`s limits is eminently possible.

No comments were found for Green Jobs: Working for People and the Environment. Be the first to comment!