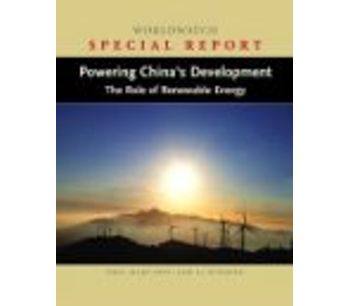 China’s need for secure, affordable, and environmentally sustainable energy for its 1.3 billion people is palpable. In 2006, China’s energy use was already the second highest in the world, having nearly doubled in the last decade, and its electricity use is growing even faster, having doubled since 2000. With both energy-intensive industry and high-tech manufacturing, China now serves as factory to the world. Rising living standards also mean more domestic consumption, including high-energy-use items like air conditioners and cars. By 2020, annual vehicle sales in China are expected to exceed those in the United States.

While most of China’s electricity comes from coal and hydropower, the growing use of oil for China’s burgeoning vehicle fleet is adding greatly to concerns about energy security. Already, China must import nearly half of its oil. Concerns about energy security, power capacity shortages, and air pollution are all adding urgency and pressure to switch to alternative technologies and fuels, including greater energy efficiency, “clean coal” technologies, nuclear power, and renewable energy. Climate change also adds pressure—China will soon pass the United States as the largest emitter of carbon dioxide from fossil fuels.

China has become a global leader in renewable energy. It is expected to invest more than $10 billion in new renewable energy capacity in 2007, second only to Germany. Most of this is for small hydropower, solar hot water, and wind power. Meanwhile, investment in large hydropower continues at $6–10 billion annually. A landmark renewable energy law, enacted in 2005, supports continued expansion of renewables as a national priority. China currently obtains 8 percent of its energy and 17 percent of its electricity from renewables—shares that are projected to increase to 15 percent and 21 percent by 2020.

It is likely that China will meet and even exceed its renewable energy development targets for 2020. Total power capacity from renewables could reach 400 gigawatts by 2020, nearly triple the 135 gigawatts existing in 2006, with hydro, wind, biomass, and solar PV power making the greatest contributions.More than one-third of China’s households could be using solar hot water by 2020 if current targets and policies are continued. Use of other renewables, including biogas and perhaps solar thermal power, will increase as well.

No comments were found for Powering China’s Development: The Role of Renewable Energy. Be the first to comment!