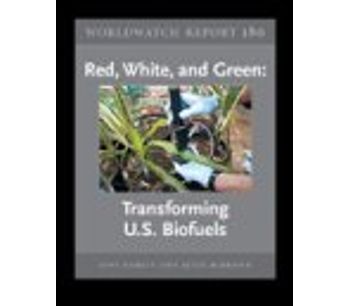 Over the last decade, biofuels have been championed in the United States as a new source of income for rural communities, as a way to reduce dependence on foreign oil, and most recently as a solution to the country's energy and climate change problems. These latter concerns are now the main driver behind the promise of biofuels, leading the United States and other governments across the world to encourage greater production and use. But as the market for biofuels expands, so too do the social, economic, and environmental impacts.

Rapid growth in biofuels use in the past five years has contributed to a sharp increase in food, feed grain, and soybean prices in the United States and abroad. These price fluctuations have fueled a global debate over `food versus fuel.` At the same time, the global economic recession has led the U.S. biofuels industry to contract, threatening jobs and livelihoods.

Studies suggest that the environmental costs of producing `first-generation` biofuels such as corn-based ethanol on a large scale likely outweigh the benefits. These costs include increased water pollution, the loss of wildlife habitat, and declining freshwater resources. Of particular concern is the link between biofuels expansion and the global conversion of land for agriculture, as biofuel crops compete with forests and food crops for limited land and other resources.

Corn ethanol leads to only minimal, if any, reductions in greenhouse gas emissions, an oft-touted benefit and justification for expanding biofuels production. Current best estimates suggest that corn ethanol provides only a 12 to 18 percent net reduction in emissions, on average, compared to gasoline. If land that is rich in carbon is converted from forests or other natural ecosystems to biofuels production, these benefits can fall away completely.

These concerns point to a crossroads for the U.S. biofuels industry. The country must now choose between a business-as-usual approach that worsens environmental and climate problems, or a more cautious approach during which decision makers take the time to `get biofuels right` before rushing forward with more production. Taking the more sustainable path includes an immediate transition to `second-generation` biofuels while phasing out reliance on unsustainable first-generation fuels.

Advanced biofuels can be produced not just from annual crops, but also from fast-growing trees and grasses as well as from a range of organic wastes and potentially even algae. The feedstocks can be grown on marginal land that does not have to compete with food production and that can be cultivated in ways that minimize harmful effects on water quality and wildlife habitat. These feedstocks may also require fewer fossil fuel inputs and retain more carbon in their soils than corn and soybeans, enhancing their ability to mitigate climate change.

Research is now under way on the conversion of cellulose to biofuel, and dozens of entrepreneurs are working to commercialize this and other advanced biofuel technologies. There is no guarantee, however, that the production of advanced biofuels at a large scale will be environmentally beneficial, although current assessments show much promise.

Three broad efforts in U.S. policy would make biofuels production more environmentally sustainable and help ensure that the use of biofuels for transportation contributes to both energy security and global efforts to reduce greenhouse gas emissions:

Reforming U.S. biofuel policies will require overcoming an array of economic forces that uphold the current industry structure. Present policies reward the least promising biofuels, and if they are not reformed, rising damage to the landscape and climate will fuel greater opposition.

Although second-generation biofuels are not a panacea, they offer the prospect of a more sustainable energy future. Getting there will require careful analysis of biofuel production, distribution, and use, including alternate ways to grow feedstock, power refineries, and use byproducts. Decision makers should also consider wider transportation solutions such as more fuel-efficient vehicles, investments in public transportation, ways to reduce congestion, and urban planning that promotes biking and walking.

The solution to the biofuels challenge is not simply a matter of substituting different feedstocks. Rather, it is about finding a new model that takes the United States down a truly red, white, and green path.

No comments were found for Red,White, and Green: Transforming U.S. Biofuels. Be the first to comment!