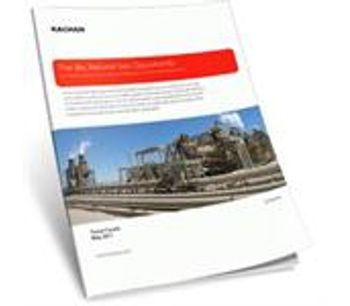 A new type of renewable natural gas from sustainable sources could eventually complement solar and wind as a primary source of utility-grade renewable energy. Chemically similar to fossil-based natural gas, it holds the promise of being transportable in existing pipelines and useable in today’s equipment. Who are the leading vendors of existing equipment and of the most exciting emerging technologies, and where are the opportunities likely to be? Read this report by Kachan & Co.

At the bustling intersection of renewable energy mandates, carbon emissions regulation, economic growth and legacy infrastructure lies an untapped potential for producers of bio natural gas (BNG). It’s known by others names—bioSNG, renewable natural gas and biomethane—but as a biologically-created compound chemically similar to commercial fossil-based natural gas, BNG is poised to make an impact on the natural gas marketplace and as a new entrant in the world of “next generation” advanced biofuels.

As a drop-in replacement for natural gas, BNG should benefit from a shift away from coal and towards natural gas. But its biggest impact could be on its green energy brethren—traditional intermittent renewables like wind and solar. As the installed base of intermittent renewables increases, BNG could find itself playing an intermittency smoothing role, with “green” dispatchable resources like NGCC turbines powered by BNG forestalling the need for other renewable storage.

A form of renewable gas with limited usefulness or scale is being made today in small quantities from a variety of biomass materials, including landfills and animal operations, and is being largely used on-site at landfills and dairies. However, a new crop of startups are quietly working to create BNG in large quantities from forestry by-products, agricultural waste, wastewater biosolids, and curbside organics in the municipal waste stream, and are aiming for their end products to be moved and burned using existing natural gas transmission—from injection site to burner tip.

If BNG produced by vendors profiled in this report and elsewhere can reach scalability and leverage the global natural gas infrastructure, renewable natural gas could become one of the most valuable renewable fuels for electric power generation and other applications. How could your organization profit from this, or manage risk in the face of it?

Companies receiving significant attention in report
Seven companies at the forefront of generating renewable natural gas directly from biomass, based in Germany, the Netherlands, Norway, Switzerland, the US and Canada, were profiled. Nine companies in Sweden, Germany, Canada and the US providing equipment to upgrade biogas from landfill or anaerobic digestion were also profiled.

No comments were found for The Bio Natural Gas Opportunity. Be the first to comment!