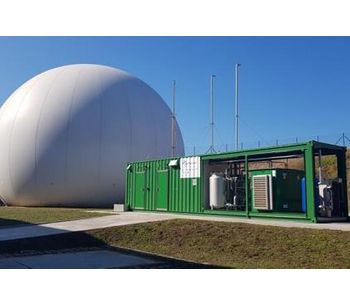 The Bens WWTP is the host for one of the first biogas upgrading plants in Spain. A 100Nm3/h biogas upgrading plant based on DMT’s three-stage membrane separation technology was installed at the facility as part of a public private collaboration of Naturgy, Energylab and the WWTP Bens. The biomethane is currently used to fuel vehicle and will be injected into the local natural gas grid.

Upgrading biogas at the Bens WWTP

The biogas upgrading plant is part of a public private collaboration, “Unidad Mixta de Gas Natural Renovable” in North West Spain to promote and demonstrate the advantages of biomethane pro-duction in the urban and industrial WWTPs sectors. The installation at EDAR Bens was the first in-stallation of its type in Spain to install a biogas upgrading plant based on membrane technology. The technology selected was DMT Environmental Technology membrane separation equipment, the Carborex®MS, installed in a three-stage configuration.

“The project is a flagship renewable natural gas project in Spain, demonstrating all the environmental and climate values of biomethane and the concept of the circular economy in the treatment of wastewaters”, says John Chamberlain, Innovation department Naturgy. Currently, Naturgy is completing the works to install equipment and tubing to inject the biomethane into the local natural gas grid to permit its consumption locally to further clients.

The Bens Waste Water Treatment plant produces around 400 Nm3/h of biogas. Approximately 75% of this biogas production is destined for internal cogeneration (6,5 GWh/y) and the plant thus had an excess production of 100 Nm3/h of biogas. Therefore, the plant was highly interested in converting this surplus of biogas to biomethane for use in vehicles and for injection into the natural gas grid as part of a circular economy concept to recover the maximum energy from the residuals treated.

The project has successfully demonstrated a circular economy concept for the WWTP sector and the biomethane produced has been used up to date as a fuel to supply a regular line bus circulating in A Coruña, which has  covered around 100,000 km. Additionally the biomethane has been supplied to three light vans operating in the WWTP that combined have driven 35.000km on the biomethane produced. Naturgy Innovation department, John Chamberlain says,”The project clearly demonstrates the value of renewable gases in the energy transition to a de-carbonised economy”.

Working with our trusted partner Kromschroeder

For projects in Spain DMT works together with Kromschroeder. Kromschroeder is DMT’s trusted partner and an important link/gateway to the Spanish renewable natural gas industry. Kromschroeder has always been focussed on the development of efficient energy use and offers the market the most advanced technologies in the field of improving energy efficiency.

No comments were found for Galicia’s first biomethane upgrading facility. Be the first to comment!