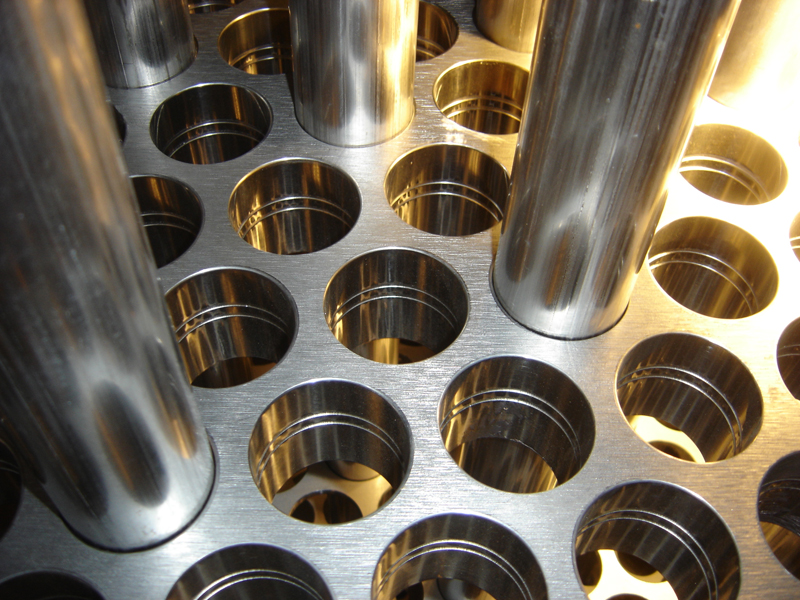 Tube falling film evaporators are used in many standard applications and smaller evaporation capacities than plate falling film evaporators. Especially the droplet separation and the cleaning of the apparatus play an essential role. We bring in our years of experience and specialized knowledge of the most individual challenges in the design and manufacture of this type of evaporator.

In the tubular falling film evaporator, the medium is internally guided through the externally heated tubes which act as a heating surface to concentrate and evaporate it. The distribution cup assures uniform loading of all tubes. The circulation pump and the recirculation conveyed conveyed the medium in a circle and is thus further evaporated.Evaporation of the more volatile liquid at the heating surface produces vapor vapor, which is conveyed downwards through the tube bundle in cocurrent with the concentrate.Subsequently, the vapor phase is separated from the liquid phase while the broth steam still has to be separated by means of a droplet separator of entrained droplets of the medium.

One possibility is to realize this by means of cyclone separators, where different solutions are conceivable. The Brüdendampf can then be used to heat the tube bundle by the steam inlet of the next evaporation stage in a multi-stage evaporation or by mechanical vapor compression (MBV) or thermal vapor recompression (TBV) in the same evaporator stage for heating the tube bundles. The condensed Brüdendampf (condensate) on the shell side of the tubes is finally discharged through a condensate outlet at the lower end of the tube bundle. On the other hand, the concentrate is drawn off at the lower end of the vaporizer body and directed to the next vaporizer stage or the next process step.

To optimize several evaporator stages are possible in one apparatus, whereby the evaporation rate can be significantly increased.

Above all, the droplet separation is a challenge with tubular film evaporators which is optimized and adapted by GIG Karasek by customer-specific circumstances. Years of experience and different areas of application make different solutions possible here.

Cleaning and dirtying the heating surfaces:

To ensure efficient operation and uniform evaporation, regular washing cycles should be used, depending on the medium. In regular downtime, a manual cleaning can be performed. In the case of particularly polluting media, there is a risk of complete clogging of the tubes which can no longer be cleaned and finally only dimmed. As an alternative, GIG Karasek can offer disk-type film evaporators as a much cheaper solution. Otherwise, the use of rinsing chemicals is conceivable and possible if necessary.

Other types of tube evaporator:

Also other types of evaporators in tube construction are conceivable and are realized by GIG Karasek:

Due to the significantly higher operating costs and poorer evaporation rates, these technologies are rarely realized today and are no longer state of the art. Most falling film evaporators are used because of significant technical advantages for a variety of applications.

No reviews were found for GIG Karasek - Tube Falling Film Evaporator. Be the first to review!