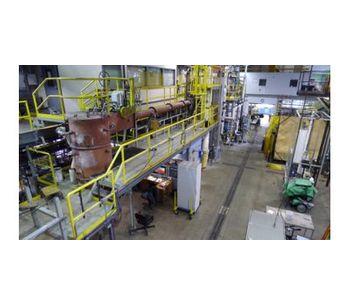 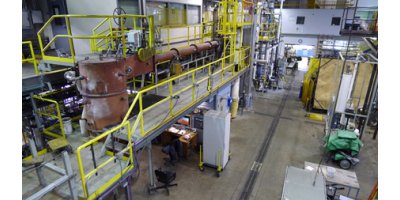 The Combustion Test Facility (CTF) is used to assess biomass and coal combustion performance and emissions. It is specially equipped to evaluate a fuel's slagging and fouling performance. The furnace is equipped with particulate control devices (electrostatic precipitator [ESP] or pulse-jet baghouse) to evaluate fly ash collection. In addition, flame stability characteristics can be determined. Flue gas desulfurization (FGD) and carbon capture systems can also be employed. The CTF can be configured for pulverized fuel swirl burner combustion or grate-fired combustion.

Process
Pulverized coal or biomass is charged to a microprocessor-controlled weight loss feeder from a transport hopper. Combustion air is preheated by an electric air heater. The feedstock is screw-fed by the gravimetric feeder into the throat of a venturi section in the primary air line to the burner. Heated secondary air is introduced through an annular section surrounding the burner. Heated tertiary air is added through two tangential ports located in the furnace wall about 1 ft above the burner cone. The percentages of the total air used as primary, secondary, and tertiary air are usually 10%, 30%, and 60%, respectively. An adjustable-swirl burner, which uses only primary and secondary air with a distribution of approximately 15% and 85%, respectively, can be used during flame stability testing. Flue gas passes out of the furnace into a 10-in.-square duct that is also refractory-lined. Located in the duct is a vertical probe bank designed to simulate superheated surfaces in a commercial boiler.

An ash-fouling test probe bank with a hinged door is located in the convective pass section of the CTF to facilitate fouling deposits, growth, and strength measurement. Three stainless steel fouling probes are cooled with steam. Embedded thermocouples regulate steam to the probe to achieve a surface metal temperature of 1000°F (538°C). The gas velocity between the tubes is normally about 25 ft/s when low-rank coals are fired at a rate sufficient to achieve a gas temperature entering the probe bank of 2000°F (1093°C).

After leaving the probe duct, the flue gas passes through a series of water-cooled heat exchangers before being discharged through an ESP, baghouse, or FGD system. The relative fouling and other performance factors of test fuels are determined under specified conditions, typically following a schedule of 8 hr on preheat gas followed by 5 hr of 100% test fuel firing. Fuel feed rate is commonly adjusted to keep the flue gas temperature entering the upper duct to the probe bank at 2000°F (1090°C), with 25% excess air.

Data Collection
Sample Collection - Fuel samples are taken periodically to form a composite sample. Oxygen, carbon dioxide, nitrous oxide, carbon monoxide, and sulfur dioxide in the flue gas are continuously monitored by recording analyzers. At the completion of a test period, the probe door is opened, and photographs can be taken of deposits. Deposits would then be removed from the probes in two fractions, an inner and an outer layer, and each is weighed and analyzed separately. Normally, the inner white layer weighs less than 10 grams, as compared to 100 to 500 grams for the outer sintered deposit. The weight of ash deposited on the probe bank during a standard test is used to rank the coal for its relative fouling potential.

Slagging Potential - The CTF can also be used to evaluate slagging potential. A water-cooled (500°–800°F) slag probe can be positioned close to the flame region of the furnace, monitoring slagging. The slagging and fouling deposits are analyzed after the CTF test for chemistry and other deposit severity factors.

Flame Stability/Swirl Burner - Flame stability can be assessed by observation of the flame and its relation to the burner quarl as a function of secondary air swirl and operating conditions at full load and under turndown conditions. An International Flame Research Foundation-type adjustable secondary air swirl generator uses primary and secondary air at approximately 15% and 85% of the total air, respectively, to adjust swirl between 0 and a maximum of 1.9. Swirl is defined as the ratio of the radial (tangential) momentum to axial momentum imparted to the secondary air by movable blocks internal to the burner and is used to set up an internal recirculation zone (IRZ) within the flame that allows greater mixing of combustion air and coal. Swirl is imparted by moving blocks to set up alternate paths of radial flow and tangential flow, creating a spin on the secondary airstream that increases the turbulence in the near-burner zone. At the fully open position of the swirl block, the secondary air passes through the swirl burner unaffected, and the momentum of this stream has only an axial component (the air enters the combustion chamber as a jet). As the angle of the blocks changes, the air begins to spin, or swirl, and the radial component to the momentum is established, creating the IRZ in the near-burner region. It is the ratio of this radial component of the momentum to the axial component that establishes the quantity defined as swirl.

Grate-Fired - The CTF can also be operated as a grate-fired system to evaluate combustion performance including ash-related issues, emissions, fuel handling, and energy efficiency. It has a firing rate basis of 0.21 m2/GJ (2.27 ft2/MMBtu) and a 0.064-cm (0.25-in.) 316 stainless steel plate, and the grate open area is 3.43%.

All constituents are measured on a dry-volume basis using the following systems:

No reviews were found for Model CTF - Combustion Test Facility. Be the first to review!