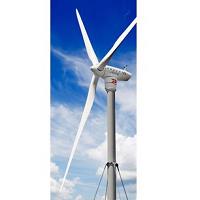 This household wind turbine is based on the well tested and dependable predecessor – Viking 25. All the good properties from the predecessor have been continued, but Viking VS has been streamlined on performance and made more flexible.

The household wind turbine can be adjusted to the ...

Viking VS is developed based on the robust and illustrious Danish concept, which stands behind the success, which the entire wind turbine industry in Denmark has experienced worldwide. The basic idea with Danish Design is to create functional and elegant products. This idea has been continued with the Viking VS household wind turbine.

Great savings can be achieved on installation and maintenance of the Viking wind turbines. No crane is needed, when erecting the wind turbine. A simple winch can do the job – and everything can be attended to at ground level. Viking household wind turbine is based on functional Danish Design.

Viking VS is a flexible and easy to adapt wind turbine, which makes it very effective. The technical explanation is that the wind turbine is both rotation regulated as well as stall regulated. This means that it is not only the wind conditions but also technical calculations that regulate the rotation speed of the blades. This provides greater control of the turbine and thereby the wind conditions can be utilized in a more productive way.

Viking VS is a Danish designed and Danish produced small wind turbines in order to assure superior quality.

Viking VS is available with the following options:

No reviews were found for Viking Wind - Model VS - Household Wind Turbine. Be the first to review!