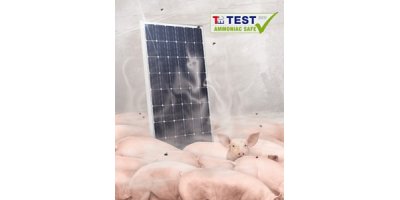 A beast of a performance even after six months in a pigsty. ANTARIS SOLAR had its monocrystalline high-performance modules ANTARIS ASM 180 and ASM 185 tested for their resistance to ammonia. The endurance test was run by the TEC Institute for Technical Innovations under unusually realistic conditions: The test involved hanging the modules in a pigsty for six months. The ANTARIS SOLAR modules came through the procedure without visible damage and without measurable deterioration in performance.

Agricultural buildings often have large roof surfaces which are ideal for installing photovoltaic systems. However, with stalls – buildings used to house animals – there is the risk that the animals’ vapours – especially from poultry and swine – could corrode solar modules and thus adversely affect the material and performance. Therefore, resistance to corrosive ammonia (NH3) plays an important role for the long-term performance of solar modules.
That’s why ANTARIS SOLAR had its high-performance monocrystalline modules from the ASM 180 and ASM 185 series tested for ammonia resistance by the TEC Institute for Technical Innovations.

Innovative test design: Long-term and unusually realistic
The current standard ammonia tests for PV modules are restricted to runtimes of less than a month, and all take place under laboratory conditions. Some of these tests even use sulphur dioxide (SO2) instead of ammonia (NH3). By contrast to these procedures, the TEC Institute chose an innovative test design which emphasised realistic requirements for the modules. As a result, a test period of six months was selected, and the modules to be tested were not hung in a laboratory: instead, they were suspended from the ceiling in a large pigsty with roughly 1,000 animals. That ensured that the modules really were exposed to all substances which occur in the real environment of a full stall. The ammonia concentration in the immediate vicinity of the modules was recorded and documented throughout the entire test period.

ANTARIS SOLAR modules continue to deliver a beast of a performance after six months in a pigsty
After the six-month test period, the ANTARIS SOLAR modules were tested thoroughly in the TEC Institute for Technical Innovations. After dirt deposits which had formed inside the stall were cleaned off, no external damage was visible on the modules. Neither the aluminium frames nor the rear films, front glass panels, connection sockets, cables, plugs or silicon seals showed signs of corrosion. The performance characteristics of the modules tested was not affected by their time spent in the company of animals. In a flash test, the ANTARIS SOLAR modules retained their full performance even after six months in the ammonia-rich atmosphere.
“Buildings used for agriculture still offer large roof surfaces ideal for PV use. So we are delighted that our modules are also suitable for use in this area due to their high ammonia resistance,” are ANTARIS SOLAR CEO’s Dr. Michael Göde’s comments on the results of the unusually long-term test in the pigsty.

No reviews were found for Antaris Solar Modules Pass Ammonia Test. Be the first to review!