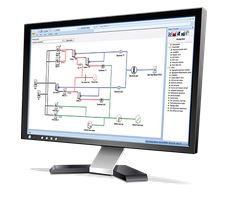 Energy Opticon is, with the software Energy Optima 3, one of the largest suppliers of forecasting and economical computer optimization for energy production. Energy Optima 3 has been on the market since 1992 and our software has been developed and fine-tuned by our staff in collaboration with our customers in a variety of new releases of the software.

Energy Optima 3 is a modular IT solution for:

All modules are standard software and the modular structure allows Energy Opticon to deliver individual solutions according to the specific customer’s demands. This means that each part of the program works, and can be purchased separately, without any limitation on communication between the modules. Access to modules and functions are controlled via users and password.

The software has been in operation at customer’s sites (in different releases) since over 22 years. By continuous and by constantly adjusting and refining along our customers' requests together with the usage of Microsoft.net framework, we already created the environment for a safe and successful future for at least the next 10-15 years.

Energy Optima 3 is supplied either as a data-based client / server system that uses Windows as a platform or as a service from Energy Opticon over the Internet.

Energy Optima 3 is a modular IT solution for:

All modules are standard software and the modular structure allows Energy Opticon to deliver individual solutions according to the specific customer’s demands. This means that each part of the program works, and can be purchased separately, without any limitation on communication between the modules. Access to modules and functions are controlled via users and password.

The software has been in operation at customer’s sites (in different releases) since over 22 years. By continuous and by constantly adjusting and refining along our customers' requests together with the usage of Microsoft.net framework, we already created the environment for a safe and successful future for at least the next 10-15 years.

Energy Optima 3 is supplied either as a data-based client / server system that uses Windows as a platform or as a service from Energy Opticon over the Internet.

Energy Optima 3 is from the start constructed to be user-friendly. It is well modelled, reflecting reality in a comfortable logical environment with graphs, tables and other reports. Therefore, it is easy to work with and to set into practical operation. These features are important in order for an optimization program to be used in plant operation.

The latest technology on the market

Energy Optima 3 is a very modern product of the latest technology in its field. It benefits great features like:

Energy Optima 3 is one of the world leading systems for online computer optimized production plans for energy producers. The system operates with different time horizons, both short and long term.

The Energy Optima 3 module for Production Optimization enables a detailed and exact projection of the customer’s production units, by using a user friendly graphical editor, the so called Topology Editor. By combining the model with fuel and trading contracts, load and price forecasts and inserting technical and economical input data directly into the graphical editor, exact production plans can be calculated in a minimum of time. Energy Optima 3 Production optimization module offers:

Total optimization of the energy production

Energy Opticon offers one of the most popular and fastest-counting system, Energy Optima 3, for online computer optimized production plans. The system automatically calculates how facilities shall be operated to minimize costs and maximize revenue.

Energy Optima 3 works with a total optimization, meaning that the electricity production and the district heating production are optimized together, a necessity for production companies working with co-generation.

Follow-up of the production economy

Exact optimizations and forecasts are crucial to maximize efficiency and profit. Analyzing the past shows how far the reality is apart from the theoretical maximum. Energy Optima 3’s follow-up delivers individual solutions to analyze costs, forecasts and the production of each single unit in the past to find unused optimization and improvement potential.

This tool also offers automatic long-term follow-up that can be used for yearly economical goals.

Another important aspect is that it focuses the production staff’s attention on the production economy, and is a very powerful tool in achieving the profits from using the module for production optimization.

All types of facilities

Energy Opticon’s many years of branch experience enables modeling of all types of production facilities and all kinds of combinations of these. This is made possible through a topology editor program that allows customers to model and change in its power plant fleet. The customer can also change load forecasts, various contracts for fuel and more.

All types of special conditions and constraints can be handled either in the software itself or with special programming.

Independent studies have shown that with computer-optimized production plans, it is possible to lower variable production costs by 2-10 % per year. With the current conditions in the electricity markets, and with the possibilities to also optimize the district heating network, the savings could be even higher (higher revenue). Moreover, it is today a mere necessity of this type of computer tools in order to act successfully on the electricity market, since the changes happen too quickly in order to be able to figure out the production plans manually or base the plans on simple rules of thumb.

All optimization results are saved in a database and can be transferred for further analysis.

Hydropower optimizations in Energy Optima 3 calculate the economically optimal operation of any type of hydropower stations. It includes run-river stations, pump storages and dams. Different time delays between different power stations in a river system are calculated and optimized as well as the water levels in the dams. It can also optimize the power balance from hydro power together with for example the power from thermal power plants. Provided that the electricity trading module is connected to the system, different types of electricity market products are taken into account in the calculations.

As the energy industry is constantly faced with increased challenges, energy companies need to find new ways to increase revenue and reduce costs.

A growing trend in energy companies with cogeneration is to initiate regional cooperation between different cities and owners. The local district heating networks are interconnected, thus increasing the flexibility of district heating systems and revenue for the sales of produced electricity and district heating, while providing the opportunity to handle the increase in complicated operating instances in production.

Especially when there is a system of waste incineration, this is a good solution, as waste incineration can sometimes even cause negative heat prices on the production side, which means that the cheap waste heat can reach more heat consumers.

In order to optimize the operation of several local district heating networks with different owners as a large network (which is complicated and includes many parameters), it requires a tool in the form of optimization tools. The companies need help to figure out which units to run, when and at what load. They also need to know the amount of heat to be transferred, as well as when and which of the companies should produce it.

To calculate which company should get what, there are different models.

In the recent years, 'deeper' co-operation has occurred in the regions, the trust model (calculations forwards and backwards). This type of collaboration enables even greater potential savings, profits, flexibility, energy security and other forms of cooperation. This also requires a high level of communication and transparency and a high focus on the production economy.

Additionally the user can create own forecasts and calculations using existing forecasts, factors or other mathematical functions. These forecasts can be used separately as well as a part of the optimization process in the Energy Optima 3 optimization system.

Energy Opticon constantly develops the advanced algorithms, which build the foundation of the forecast calculation. The aim is to perfect the precision of the forecasts, not just under perfect conditions, but also in situations when measurements are faulty, late or missing. The result is a forecast that not only reaches very high precision, but also is also stable enough to function even when for example measurements are wrong or missing.

It is very important for the production planning that the forecasts are accurate. The forecasts are indata to the production planning. To get good results, the indata has to be good. When the district heating load forecast is fluctuating a lot, it is interesting to know exactly when to start a new boiler, and which boiler, in order to avoid unnecessary start and stop costs on the boilers.

Energy Opticon provides a very accurate district heating load forecast. The forecast is based on algorithms that are the result of many years of experience and developed in-house.

The forecast is calculated with 15 minutes interval (different intervals are possible). Therefore, Energy Opticon is able to provide continuous and current information to the planning staff, considering new conditions.

The district heating forecast can be used to manage the operation planning manually, or this can be done by using the production module in Energy Optima 3.

The electricity load forecast is using an adaptive approach and is recalculated every 15 minutes. The forecast is continuously improved by using historical data together with current online-measurements.

The Smart Optima Heat Network (SOHN) module is a software tool that helps district heating producing companies to economically optimize the forward temperature in the operation of its district heating network, based on adaptive and dynamic calculation models.

The new module takes into consideration:

The district heating network is dynamic in nature such that a change in flow rate affects the entire network within a few seconds. However, it may take several hours for a change in forward temperature to reach the entire network. Smart Optima Heat Network utilizes this phenomenon and allows working with the dynamics of the network instead of against it.

The result of optimizing with the Smart Optima Heat Network are:

Energy Optima 3 Cloud provides the possibility to access the entire system of total optimization of economic energy production at a cost-effective level without high costs for own servers, IT competence or large investment costs.

Regardless of the size of energy system or company, you have the opportunity to access Energy Optima 3 wherever you are - by your computer, at mobile phone or tablet.

Energy Optima 3 focuses on the needs of traders working with the current market demands under a constantly rising time pressure. With standard solutions for individual scenarios, Energy Optima 3 optimizes:

Confirmed optimization results or data stays in the system and is taken into consideration in following optimizations if required.

The progress of renewable energies with higher capacities of wind and photovoltaic energy have led to very intensive changes on the electricity market:

The Energy Optima 3 Trading Module is therefore mainly focused on trading of electricity, but can also be used for trading of other forms of energy.

Energy Optima 3 includes electricity prices forecasts for the day-ahead spotmarket with prices for each hour of the next few days in the total optimization. This forecast is then the basis for day-ahead electricity trading on the power exchange.

Energy Optima 3 handles all the three types of reserve power traded in the markets for balance power:

In optimizations that include the trading module, all the ingoing components of the total economy are optimized:

Import/Export of data: With this solution Energy Opticon can offer a wide range of possibilities and high flexibility about the import and export of data to and from Energy Optima 3. The tool allows customers a maximum level of handling changes themselves.

Automatic calculations of load forecasts and optimized energy production plans demand accurate and safe management and validation of measurements. Most other modules in system depend on measurements. For this reason, the Measurement Module is the natural center of the Energy Optima 3 system.

No reviews were found for Version Optima 3 - Energy Optimal Software. Be the first to review!