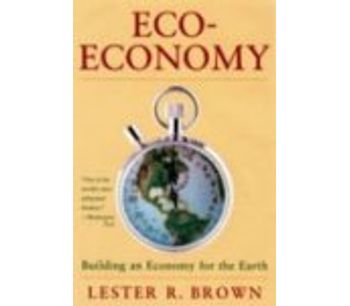 Eco-Economy: Building an Economy for the Earth

For the first time since the oil age began, the world has the technology to wean itself from petroleum coming from the politically volatile Middle East.

A combination of wind turbines, solar cells, hydrogen generators, and fuel cell engines offers not only energy independence, but an alternative to climate-disrupting fossil fuels.

The global economy is out of sync with the earth's ecosystem, as evidenced by collapsing fisheries, shrinking forests, expanding deserts, eroding soils, and falling water tables. This can also be seen in the earth's changing climate as rising temperatures lead to more destructive storms, melting glaciers, and rising sea levels.

The needed restructuring of the global economy has already begun. The shift from the fossil fuel era to the solar/hydrogen era can be seen in the contrasting growth rates of these energy sources in recent years. During the last decade, the use of wind power grew by 25 percent a year, solar cells at 20 percent a year, and geothermal energy at 4 percent annually. In stark contrast, oil expanded by only 1 percent a year and coal use declined by 1 percent annually. Natural gas, which is destined to be the transition fuel from the fossil fuel era to the hydrogen era, grew by 2 percent per year.

The restructuring is gaining momentum. For example, from 1995 to 2000, world wind electric generation expanded nearly fourfold, a growth rate previously found only in the computer industry. Denmark gets 15 percent of its electricity from wind. In the north German state of Schleswig-Holstein, it is 19 percent. For Spain's state of Navarra, it is 22 percent.

'Wind power has an enormous potential. According to a U.S. Department of Energy wind resources inventory, three of the most wind-rich states - North Dakota, Kansas, and Texas - have enough harnessable wind energy to satisfy national electricity needs. China can double its current electricity generation from wind alone. Europe's offshore wind potential is sufficient to meet the continent's electricity needs.

Advances in wind turbine design have reduced electricity costs from 38 cents per kilowatt hour in the early 1980s to less than 4 cents at prime wind sites in 2001. Further cuts are in prospect. In response to falling costs, wind farms have come online recently in Minnesota, Iowa, Kansas, Texas, Colorado, Wyoming, Oregon, Washington, and Pennsylvania.

A quarter-acre of land leased to the local utility to site a large, advanced design wind turbine can easily yield a farmer or rancher $2,000 in royalties per year while providing the community with $100,000 worth of electricity. Money spent on wind-generated electricity tends to remain in the community, providing income, jobs, and tax revenue.

A project in the planning stages in eastern South Dakota to develop 3,000 megawatts of wind power for transmission across Iowa to the industrial Midwest around Chicago is not only a large wind power project, it is one of the largest energy projects in the world today.

The European Wind Energy Association, which in 1996 had set a target of 40,000 megawatts for Europe by 2010, recently raised its goal to 60,000 megawatts. The United States is projected to increase its wind-generating capacity in 2001 by at least 60 percent.

Cheap electricity from wind farms can be used to electrolyze water and produce hydrogen, which can be used to power gas turbines that supply electricity when the wind ebbs. Hydrogen is also the fuel of choice for the new fuel cell engines that every major automobile manufacturer is now working on. The farmers and ranchers who own most of the U.S. wind rights could one day supply not only most of the country's electricity, but also much of the fuel used in its automobiles.

The use of solar cells is also expanding rapidly. In remote villages where supplying electricity traditionally depended on building a centralized power plant and constructing a grid to distribute the electricity, it is now often cheaper simply to install solar cells. In inaccessible Andean villages, investing in solar cells may be cheaper than buying candles. The same is true for those villages in India where lighting comes from kerosene lamps.

At the end of 2000, nearly one million homes worldwide were getting their electricity from solar cells. With the new solar cell roofing material developed in Japan, the stage is set for dramatic gains in this new energy source as rooftops become the power plants of buildings. For many of the nearly 2 billion people without electricity, solar cells are their best hope.

'The materials economy is also changing. The challenge is to shift from a linear flow-through economy to a comprehensive recycling economy. Progress is being made on this front, but not nearly enough. Some countries are advancing. For example, 58 percent of U.S. steel production now comes from scrap. In Germany 72 percent of all paper comes from paper recycling mills. If the entire world were to achieve this rate, wood needed for pulp production would drop by nearly one third.

In an eco-economy most energy is produced locally from wind, solar cells, hydropower, biomass, and geothermal sources, thus offering a new grassroots development potential for developing countries, one that does not require spending scarce foreign exchange on imported oil. With a comprehensive recycling economy, the need for imported raw materials will also diminish, reducing vulnerability to external political and economic instability.

Another key characteristic of an eco-economy is population stability. Over the last few decades, some 31 countries in Europe plus Japan have stabilized their populations. One of the keys to this is improving the status of women. The more education women have, the fewer children they have. World Bank research indicates that investing in the education of girls yields an economic return perhaps four times that of investing in electric utilities.

Economic decisionmakers at all levels - corporate planners, government leaders, investment bankers, and individual consumers - all rely on market signals. But the market often does not tell the truth. For example, when we buy a gallon of gasoline, we pay the costs of producing gasoline, but not the health care costs of those who suffer from the polluted air, the acid rain damage, or the costs of climate disruption from burning the gasoline.

Sometimes we learn of the market's shortcomings the hard way. For example, by 1998, China's Yangtze River basin had lost 85 percent of its original forest cover. Partly as a result, flooding of the Yangtze River basin that year displaced 120 million people and caused $30 billion worth of damage. In response, Chinese officials banned tree cutting in the upper reaches of the basin. Trees standing, they argued, were worth three times as much as trees cut.

Restructuring the global economy will require ecologists and economists to work together to identify the indirect costs associated with a particular product or service. These costs can then be incorporated into market prices in the form of a tax and offset by a reduction in income taxes. This restructuring of the tax system, which is the key to restructuring the economy, does not change the level of taxes, only their composition.

Building an eco-economy represents the greatest investment opportunity in history. The companies that have a vision of the new economy and incorporate it into their planning will be the winners. Those that cling to the past risk becoming part of it.

The eco-economy is beginning to take shape. Glimpses of it can be seen in the wind farms of Denmark, the solar rooftops of Japan, the paper recycling mills of Germany, the steel recycling mills of the United States, the irrigation systems of Israel, the reforested mountains of South Korea, and the bicycle networks of the Netherlands.

Building an eco-economy is a goal that cannot be compromised. If we are going to restructure the economy in the time available, all of us will need to be involved. One way or another, the choice will be made by our generation. But it will affect life on earth for all generations to come.

No comments were found for Eco-Economy: Building an Economy for the Earth. Be the first to comment!