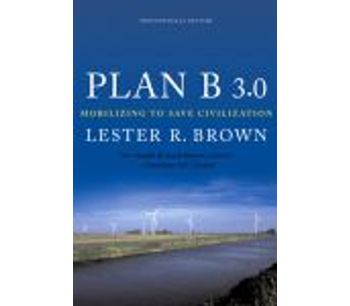 PLAN B 3.0: Mobilizing to Save Civilization

Experts were “stunned” this past summer by the loss of Arctic sea ice. An area almost twice the size of Britain disappeared in a single week.

The Greenland ice cap is melting so fast that it is triggering minor earthquakes as pieces of ice weighing several billion tons break off the ice sheet and slide into the sea. The West Antarctic Ice Sheet is also melting faster than predicted.

If we cannot curb CO2 emissions quickly enough to save these two huge ice sheets, sea level will rise 39 feet, inundating many of the world’s coastal cities and creating over 600 million rising-sea refugees.

The annual addition of 70 million people to world population is concentrated in countries where water tables are falling and wells are going dry, forests are shrinking, soils are eroding, and grasslands are turning into desert. In countries overwhelmed by these trends, weaker governments are breaking down. Each year the number of failing states increases. Failing states are an early sign of a failing civilization.

With business-as-usual (Plan A), these trends will continue. More and more states will fail until civilization itself begins to unravel.

We do not have much time. We are crossing natural thresholds that we cannot see and violating deadlines that we do not recognize. These deadlines are set by nature. Nature is the timekeeper, but we cannot see the clock.

Time for Plan B

Plan B 3.0 is a comprehensive plan for reversing the trends that are undermining civilization. Its four overriding goals are climate stabilization, population stabilization, poverty eradication, and the restoration of the earth’s ecosystems.

At the heart of the climate-stabilizing initiative is a detailed plan to cut carbon dioxide emissions 80 percent by 2020 in order to hold the world temperature rise to a minimum. This initiative has three components—raising energy efficiency, developing renewable sources of energy, and expanding the earth’s forest cover. The goal is to back out all coal-fired power plants.

Although efforts have been made in recent decades to raise the efficiency of energy use, the potential is still largely untapped. Perhaps the quickest, easiest, and most profitable way to cut carbon emissions worldwide is simply to replace incandescent bulbs with compact fluorescent bulbs that use only a fourth as much electricity. Turning to more efficient light bulbs can reduce world electricity use 12 percent—enough to close 705 of the world’s coal-fired power plants.

In the United States, buildings—commercial and residential—account for 70 percent of electricity use and over 38 percent of carbon emissions. Retrofitting an existing building typically can cut energy use by 20–50 percent. The next step, shifting to carbon-free electricity to heat, cool, and light the building completes the transformation to a zero-carbon emissions building.

Wind is the centerpiece of the Plan B energy economy. It is abundant, low cost, and widely distributed; it scales easily, and can be developed quickly. Oil wells go dry and coal seams run out, but the earth’s wind resources cannot be depleted.

The goal of this climate-stabilizing initiative is to develop at wartime speed 3 million megawatts of wind-generating capacity by 2020, enough to supply 40 percent of the world’s electricity needs. This would take the manufacturing of 1.5 million wind turbines of 2 megawatts each. These turbines could be produced on assembly lines by reopening closed automobile plants, much as bombers were assembled in auto plants during World War II.

Energy from the Sun

Solar technologies provide exciting opportunities for getting us off the carbon treadmill. For instance, rooftop solar water heaters are spreading fast in Europe and China. Large-scale solar thermal power plants are under construction or planned in California, Florida, Spain, and Algeria. Solar-electric cell sales are doubling every two years.

The combination of advanced-design wind turbines and gas-electric hybrid cars has set the stage for the evolution of an entirely new automotive fuel economy. If the battery storage of the typical hybrid car is expanded and a plug-in capacity is installed so the batteries can be recharged at night, then we could do our short-distance driving—commuting to work, grocery shopping, etc.—almost entirely with cheap, wind-generated electricity.

This would permit us to not only run our cars largely on renewable electricity, but at the gasoline-equivalent cost of less than $1 per gallon. Five major automakers are coming to market with plug-in hybrids.

Moving Down the Food Chain

Perhaps not surprisingly, what we eat also affects climate. The energy used to provide the typical American diet and that used for personal transportation are roughly the same. A plant-based diet requires roughly one fourth as much energy as a diet rich in red meat. Shifting from a diet rich in red meat to a plant-based diet cuts greenhouse gas emissions as much as shifting from a Suburban SUV to a Prius.

The key to restructuring the world energy economy is to get the market to tell the environmental truth. To do this, we propose lowering income taxes and offsetting this with a carbon tax that will reflect the costs of climate disruption and air pollution. We propose a worldwide carbon tax of $240 per ton to be phased in at the rate of $20 per year between 2008 and 2020. This initiative, which would be offset at every step of the way with a matching reduction in income taxes, would discourage fossil fuel use and encourage investment in renewable sources of energy.

What We Need To Do Is Doable

The goals laid out in Plan B 3.0 for developing renewable sources of energy by 2020 are based not on what is conventionally believed to be politically feasible but on what we think is needed to prevent irreversible climate change. This is not Plan A: business-as-usual. This is Plan B: an all-out response proportionate to the threat global warming presents to our future.

Things are moving on the renewable energy front. Sixty million Europeans now get their residential electricity from wind farms. Nearly 40 million Chinese homes get their hot water from rooftop solar-water heaters. Iceland now heats 90 percent of its homes with geothermal energy, virtually eliminating the use of coal for home heating. The Philippines gets 25 percent of its electricity from geothermal power plants.

We have the technologies to build a new economy, one that will be powered with energy sources that will last as long as the sun itself. What we need now is to mobilize the political will.

No comments were found for PLAN B 3.0: Mobilizing to Save Civilization. Be the first to comment!