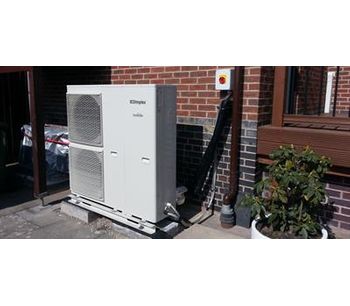 In this day and age, with skyrocketing fuel bills and the introduction of the Renewable Heat Incentive, an increasing number of people are turning to alternative means and renewable technologies when it comes to generating heat.

Generally fitted outside a house, they work by absorbing the free and sustainable latent energy in the air; converting outside heat in order to generate enough green, low cost energy to heat underfloor heating systems, radiators, and even provide hot water for your home.

Air source heat pumps use the same principal as refrigerators that extract heat from inside to make it possible to achieve a colder temperature to preserve food and keep beverages cold.

They work by absorbing heat and turning it to fluid, which is then distributed to an exchanger. This heat is then absorbed by a refrigeration system and passes through a heat compressor to achieve a higher temperature, which can be used to provide indoor heat as well as heat water.

Air-to-air – extracts latent heat from the outside air and used to heat the air within you home in a similar way an air conditioner cools air.

Air-to-water – used to heat water in the same way a boiler does. Very suitable for use with underfloor heating. Can also be used to replace a standard boiler with some system changes.

There are two major types of air source heat pumps:

With the introduction of the Renewable Heat Incentive, which came into force in Summer of 2013, homeowners are being urged to look into ways of generating their own renewable heat such air source heat pumps and similar technologies such as ground source heat pumps,biomass boilers and solar thermal systems.

This government-backed incentive would see homeowners not only save on their fuel bills, but would enable them to make money in the process. Administered by the official regulator Ofgem, the idea is to earn a fixed income for every kilowatt-hour of heat produced.

So, if the idea of saving money, helping the environment by reducing your CO2 emissions by up to as much as 50% and earning a fixed income in the process appeals, then installing air source heat pumps could be a win-win situation all round.

No reviews were found for Air Source Heat Pumps. Be the first to review!