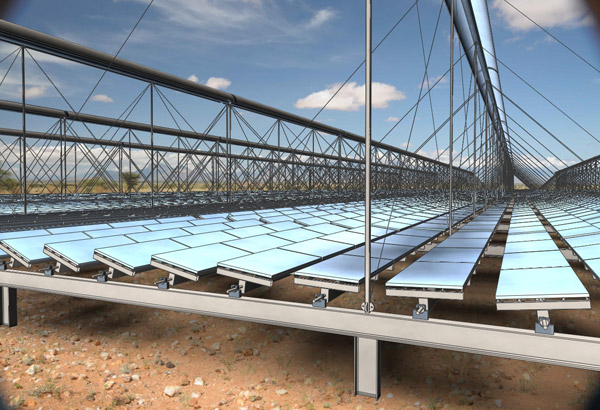 The system consists of reflector strips which are connected with the solar tracking system (PLC solar tracker) and via the reflectance method they concentrate the solar energy into a receiver situated on the top side of the system. In the centre of the receiver there is a cylindrical shaped absorber, consisting of two concentric channels (inner and outer) which is responsible for creating vacuum conditions in the outer channel. This results in substantial reduction of heat loss. Within the inner cylindrical tube, there is a flow of special liquid which converts solar energy into heat.

The heat produced can be used in two ways:

The linear concentrating solar collectors are believed to be the evolution of the parabolic trough and they offer significant extra advantages:

The Operation Principle
The reflectors - depending on the sun rotation - gyrate on an axis. In this way, the maximum solar radiation is being reflected on the surface of the reflectors and then is being directed towards the receiver. Thereafter, the solar radiation is being transferred (either directly or via a secondary reflection) towards the vacuum tube where it is being collected (outer cylindrical channel). This vacuum tube is placed in the centre of the receiver. The radiation that is being collected is then absorbed by the receiver which transforms it into heat. The liquid that flows inside the tube can reach temperatures ranging between 150° - 400°C. Then, depending on the appliance, the liquid is being driven to consumption.

Implementation Possibilities
The Solecon Concentrating Solar Collectors have excellent flexibility and can be applied on a wide range of various industrial purposes as well as on other sectors, too. Their main characteristic is that they offer trustworthy, eco-friendly, and economic alternatives for energy production.

Cooling
The cooling production from solar energy seems to be one of the most appealing implementations. It is well known that, during the summer season, the demand for energy is being increased dramatically due to the growing needs for cooling.

Contrary to the cooling with traditional mediums where large amounts of electrical energy are needed for the proper operation of the compressor, in the case of solar cooling there is consumption of heat energy which is so generously provided by the sun in the summer, and above all for free. The end result of this process is the production of cool water or cool air. It could be said that the major advantage of the solar cooling system is the perfectly balanced synchronization between the peak of demand with the peak of solar radiation.

Steam Production
There are various kinds of collectors being used for steam production, especially for industrial purposes. The high temperature thermal medium which flows in the collection field, transfers the heat into the water via a heat exchanger. A prerequisite for achieving high temperatures is the use of Concentrating Solar Collectors.

Desalination
Nowadays, water scarcity seems to be one of the biggest problems that humanity has to face. It is the end-result of the wrong human management regarding natural resources. The lack of drinking water is a huge problem that Greek islands have to face, where in many cases, the water supply is based on ship transportation, because many Greek islands face severe water scarcity and they cannot cope with the ever growing demand for water autonomously. The traditional industrial desalination of sea water consumes extremely large amounts of electricity and turns to be a very expensive alternative, especially if the electricity is being produced by fossil fuel.

The sun is probably the only renewable energy source that can prove to be a feasible and economic energy alternative to achieve eco-friendly and economic desalination. Desalination technologies operating with solar energy already prove to operate satisfactorily and without polluting the environment.

Production of Electricity
It can be said that, the advantages regarding the use of Concentrating Solar Systems are equally socio-economic and environmental. With the prices of fossil fuels hitting record high levels and with emissions, produced from their use, being extremely harmful to the environment, it is evident that there is a great need for a reliable energy alternative.

The Concentrating Solar Technologies seem to be the ideal solution to this dramatic problem. Concentrating Solar Collectors consist of reflector layouts that collect the solar energy by focusing the solar radiation on a specific point or a line which in turn leads to the heating of a thermal medium (i.e. steam or oil). When the thermal medium reaches high temperatures (150° – 1200° C), is being transferred into a converter that converts thermal energy into kinetic energy. Then, the kinetic energy is being converted into electric via a set of generators.

Videos related to this service

No reviews were found for Sole - Concentrating Solar Systems Research & Development Services. Be the first to review!