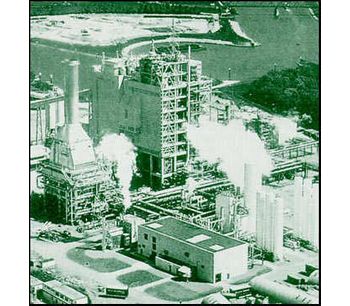 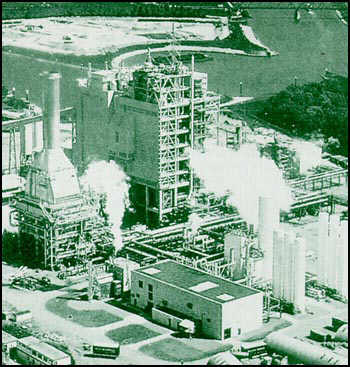 Gasification is a century old technology, which flourished quite well before and during the second world war.  Gasification can be broadly defined as the thermochemical conversion of a usually solid or liquid carbon-based material into a combustible gaseous product. The technology disappeared soon after the second world war, when liquid fuel became easily available. The interests in the gasification technology has undergone many ups and downs in running century. Today, because of increased fuel prices and environmental concern, there is renewed interest in this century old technology. Gasification has become more modern and quite sophisticated technology.

The advantage of this technology is decentralized energy conversion system which operates economically even for small scale.  A gas producer is a simple device consisting of usually cylindrical container with space for fuel, air inlet, gas exit and grate. It can be made of fire bricks, steel or concrete and oil barrels. The design of gasifier depends upon type of fuel used and whether gasifier is portable or stationary. Gasifier alone itself is of little use.  The complete gasification system consists of gasification unit (gasifier), purification unit and energy converter - burners or internal combustion engine.

Everywhere in the world, significant concern exists over relatively high cost of electricity for citizens and businesses, which imposes a financial burden and impairs country’s ability to compete effectively.  On the other hand, there is a significant cost of protecting our environment.  New environmentally preferred technologies and strategies are needed to produce and deliver electricity at lower cost and decreased environmental impacts.  The potential problem is further compounded by a fact that systems reliability and the cost of electricity are adversely affected by large inventory of older steam power plants as well as old, outdated means of Management of Renewables (Waste).

Moreover, it is further amplified by a need for new cost-effective pollution control technologies needed to reduce the health and environmental impacts from power plant, landfills, and outdated Waste Remediation technologies.  Therefore, a pressing need exists to develop superior, but economical method to produce electricity while reducing the waste landfills with the state-of-the-art control emissions of fine particles and vapor-phase aerosols/toxics.

An attractive and practicable possibility of renewables (waste) utilization for energy production is gasification integrated with a combined cycle.  This technology offers the possibility to reach high efficiencies based on a fundamentally clean and renewable fuel.  Integrated Biomass Gasification Combined Cycle (IBGCC) systems developed to replace the traditional combustor with a gasifier and gas turbine (White Paper, Requires ACROBAT Reader).  Exhaust heat from the gas turbine is used to produce steam for a conventional steam turbine.  The gas and steam turbines operate together as a combined cycle.  Biomass gasifiers have the potential to be up to twice as efficient as using conventional boilers to generate electricity.  For even greater efficiency, heat from the gas turbine exhaust can be used to generate additional electricity with a steam cycle.  These improvements in efficiency can make environmentally clean biomass energy available at costs more competitive with fossil fuels.

Biomass gasification is a process that converts wood and/or green waste into a synthetic gas composed mainly of carbon monoxide and hydrogen. Gasification is basically a thermo-chemical process which converts biomass materials into gaseous component. The results of gasification is the producer gas, containing carbon monoxide, hydrogen, methane and some other inert gases. Mixed with air, the producer gas can be used in gasoline or diesel engine with little modifications.

Theoretically, almost all kinds of biomass with moisture content of 5-30% can be gasified, however, not every biomass fuel can lead to the successful gasification. Most of the development work is carried out with common fuels such as coal, charcoal and wood. It was recognized that fuel properties such as surface, size, shape as well as moisture content, volatile matter and carbon content influence gasification.

The key to a successful design of gasifier is to understand the properties and thermal behavior of the fuel as fed to the gasifier. Operation of a conventional gasification system demands knowledgeable and skilled operator. Those interested in this technology must remember that it requires hard work and tolerance. Compared to conventional system such as liquid fuel run engines, biomass gasification technology is inconvenient. But it is economical at many places and may lead to self-reliance in the crucial time of fuel crisis.

Plasma gasification is a non-incineration thermal process, which uses extremely high temperatures in an oxygen-starved environment to completely decompose input waste (MSW, biomass) material into very simple molecules.  The extreme heat and lack of oxygen results in pyrolysis of the input waste material.  Pyrolysis is the decomposition of matter in the absence of oxygen.

Pyrolysis can be defined as incomplete thermal degradation of the feed into char, condensable liquids (tars and oils) and non-condensable gases (carbon monoxide, carbon dioxide, water, methane and other light hydrocarbons) in the absence of air, at temperatures above about 200 °C.  Slow pyrolysis maximizes the production of char (as in charcoal manufacture), whereas fast pyrolysis is used to produce either liquids or gases.  Flash pyrolysis (very rapid heating) combined with rapid quenching (cooling) produces high levels of liquid products (called pyrolysis oils).  Longer reaction times permit these primary pyrolysis products to further decompose into non-condensable gases and secondary chars.

The Integrated Plasma Gasification (IPG) system utilizes a plasma gasification integrated with  a Combined Cycle (CC) for energy generation.  The IPG system is a unique, but effective thermal system powered by a plasma discharge generated by special electrodes that introduce the electric discharge through a “molten bath” of the waste being processed (i.e. molten slag).  The process of utilizing plasma generators to thermally dissociate waste materials and convert the materials into re-usable products is distinctly different from combustion (incineration) in that it uses energy from the plasma to thermally convert organic waste from a solid (or liquid) to a gas through a process called controlled pyrolysis or controlled gasification.  The constant high operating temperature ensures the destruction of all complex organic compounds, and the process control minimizes the possibility of reformation of complex pollutants.  The escape of volatile metals and acid gases can also be minimized to levels that can meet the most stringent air emission standards.  In some cases where the organic content of the waste stream is high, the pyrolysis product gas, composed mainly of hydrogen and carbon monoxide, can be used to safely recover much of the energy in the waste

Concurrent with (or independent of) the controlled pyrolysis of organic materials, IPG system can melt inorganic materials (glass, soil, metals, and ash), if present.  These components, common in many waste streams, are melted and typically recovered as a glassy slag. The glass layer serves as a medium for chemically binding many metals in a non-leachable manner through vitrification.  If large amounts of ferrous or non-ferrous metals are present, the molten material will separate as one or more layers, a glassy layer over a metal alloy layer.  Waste streams that are predominantly metal can usually be processed to promote metal recovery.  This is an important and unique benefit, particularly when processing MSW.

The processing chamber is heated to the desired temperature (1600 to 2500 °C) before the waste materials are fed into the reactor.  Waste is fed into the processing chamber on a continuous basis.  Organic materials rapidly dissociate into elemental constituents, mainly hydrogen, carbon, oxygen, and depending on the content of halogenated compounds in the feed stock, acid gases will also be formed.  The elements will form simple gases that are stable at the operating temperatures, primarily diatomic hydrogen, carbon monoxide and hydrogen chloride.  The remaining carbon (a solid) will remain a solid until a limited source of oxygen (usually in the form of steam) is introduced (through an exact, computer controlled, metering system) at which time it will form carbon monoxide (a gas).  The result is a pyrolysis product gas (“SynGas”) composed mainly of hydrogen, carbon monoxide, and an acid gas (i.e., HCl) created from the dissociation of the halogen elements.  Small amounts of other gases will be present, including nitrogen, if air or nitrogen is being used as the plasma gas.  Within the strongly reducing environment of the pyrolysis chamber, most NOx is either not formed or quickly reduced to gaseous elemental Nitrogen.  Accordingly, the only Nitrogen expected in the pyrolysis chamber will be generated from the presence of nitrogen in the feed stock material.

The pyrolysis product gas (“Synthetic Gas” or “SynGas”) formed from the organic waste is piped to a quench and gas-scrubbing system where the acid gas is neutralized and entrained particulate is removed.  The resulting clean fuel gas (hydrogen and carbon monoxide) can be used as a fuel for steam or electric generating equipment or the hydrogen can be extracted as a clean fuel.  If recovery of chemical energy from this fuel gas is not desirable or practical, it can be converted to carbon dioxide and water in a flare or a thermal oxidizer.

Inorganic constituents (metals and minerals) will melt in the processing chamber and if silicates or other glass formers are present will form a glassy molten liquid.  For those wastes that contain no glass formers (e.g. silicates), silicate (i.e. sand) must be added to accomplish the permanent (non-leachable) encapsulation of metals through vitrification.

The molten material that accumulates in the bottom of the processing chamber can be periodically tapped into molds or into a water tank and recovered as a vitreous solid that is non-leachable and can be used as a construction aggregate. Any metal material can be tapped into molds and recycled.

A plasma gasification facility can be constructed on a reasonably small site.

No reviews were found for Allied - Gasification Unit. Be the first to review!